A good start to the year with mild weather for the first half of the Month, with cold and mild weather continuing from mid month onward, weeks 4 and 5 however winter returned with minus temps frost and snow, bringing with it the return of the Fieldfare and Redwing flocks

The months highlights were c60 Pink footed Geese going in a West/South West direction on the 21st at 12:15pm, Goldcrest (2), Treecreeper (1) but week 5 brought a bird I hadn’t seen on the patch for 12 years, Lesser Spotted Woodpecker, a single bird and all to briefly despite extensive searching, a sighting that is going to be hard to beat over the coming year

26 bird species were seen giving a welcome start to the New Year :- 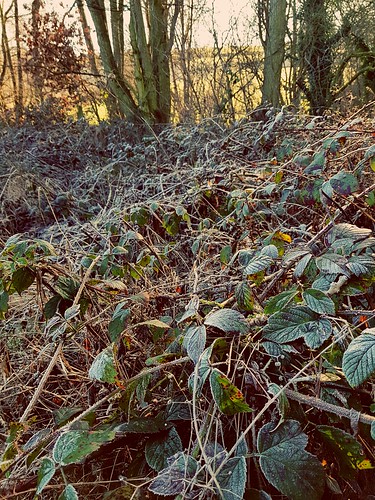 The mild weather returned for the beginning of the month but it brought with it plenty of rain and wind. Mild weather continued into the middle of the month with temperatures into double figures, unseasonal, but it did bring a settled dry spell.

Most of the highlights happened in week 9 due to record temperatures hitting the country recording highs in most areas of 20° C plus. Bird highlights were 6 Common Buzzards in the air together, a Sparrowhawk was seen and a lone Redwing. We also had the appearance of a couple of species of Butterfly these were Comma and Small Tortoiseshell 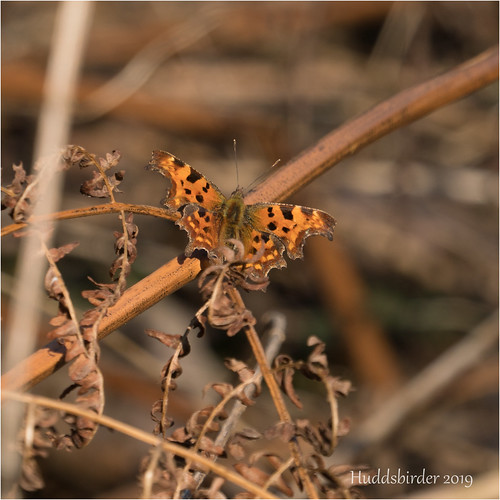 First week of March lived up the saying that it “comes in like a Lion and goes out like a lamb”  with storm Freya hitting the UK….here’s hoping it does go out like a lamb

The Lion raged on in the middle of the month with storms moving thru , turned out to be very wet and windy

Highlights in March were Common Gulls flying thru, pair of Mallard at the pond, 20th produced the first summer migrant in the form of a returning Chiffchaff, and a few butterflies were on the wing as March goes out like a lamb (Comma, Small Tortoiseshell)

April should see the return of many summer migrants

First week of the month (Week 14) brought back a cold snap, hence the insects went back into hibernation, however at the beginning of the week due to a slight warm moment a couple of Tree Bumblebees were found (new species for site)..The highlights of the first week was a Stock Dove flying thru, Goldfinch back on site and the Chiffchaff seems to have found a mate with two now on site, we wait for the arrival of more summer migrants lets hope we start to get some southerly winds

Blackcaps (2) arrived during Week 15 a week which was mainly dry with sunny intervals, the Chiffchaff pair were also seen along with Common Buzzard and a very vocal Nuthatch, a Great Spotted Woodpecker was seen excavating a nest hole, then seen regularly in the same area.

A few butterflies appeared at the end of week 15 these being Peacock and Small Tortoiseshell , also along with the years first Orange tips. A Bee-Fly was also of note

The end of the month, Week 16, drew in a vocal Willow Warbler on the 17th (seen and heard), a scarce bird on site, not a bird easily seen and they dont usually stay. New butterflies included Green veined White and Speckled Wood. The first moth of the year was a Early Thorn a new species for site. 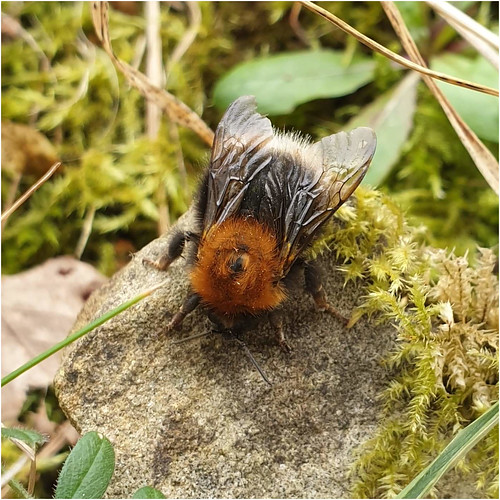 No major highlights to start the month a couple of Brimstone Butterflies flew thru in the sunny intervals. Bird activity this month started with Six Male Blackcaps on territory, a single female Blackcap was also seen. St Marks flies are now also on the wing (Black Flies with dangling legs in flight). Still waiting for the arrival of Swallows and Swifts and anymore Warblers, the Willow Warbler located last month seems to have moved thru. The 7th saw the return of a single Swallow, it didn’t pick a dry week.

Week 20 brought a few highlights…Male and Female GS Woodpeckers are now busy feeding young, Hairy Sheildbugs were out in good numbers, the Willow Warbler was relocated or another was, but the bonus was a new bird for site a Garden Warbler which was located near the Willow Warbler (bird species for site now 64). There is also at the moment only one Swallow on site!! no Swifts or House Martins thru either!! on a better note a Holly Blue Butterfly was seen a first for the year along with another first for the year Small Copper Butterfly

Another month closes and still the birds at the moment are throwing out surprises with the arrival of two Common Whitethroats on site and a single Pied Wagtail seen in the car park, insects still not out in force 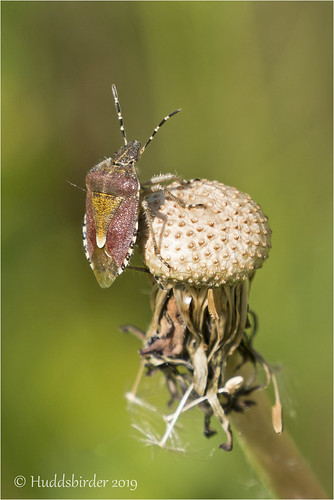 Looking like June is heading out to be a wet and windy Month however we’ve had a good few highlights with a single Swift going thru on the first week, Insects have been low on the ground but a single male Common Blue Butterfly in the first week was a great find after this species being a new arrival last year, and a couple of Large Skippers in the second week

Holidays and bad weather put the rest of the month out of action until the last day when the sun shone again, this brought out new butterflies for the year namely, Meadow Brown, Ringlet and Small Skipper also a Small Copper put in appearance. New birds on this day were a Common Buzzard and the Garden Warbler which seems to have moved location 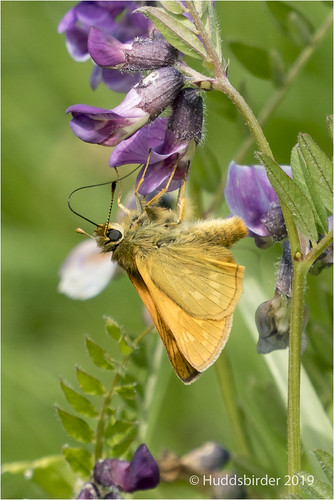 The first week of July has given us good temperatures and a Very High Pollen count much to my dismay. I’ll start with the birds with good news of the Swallows which again have breed successfully and with the young ones leaving the nest this week. Garden Warbler has been active this week now in the bottom of the field having started at the top end, other bird highlights this week have been Chiffchaff, Bullfinch, Common Buzzard, Nuthatch, and the biggest surprise was a “yaffling” Green Woodpecker which alas couldn’t be located. Green Woodpecker hasn’t been seen on sight for numerous years, so do we have a very welcome comeback at last?? Back end of the month produced a new bird species for site, when I was in the right place at the right time, three Herring Gulls flew thru the site (over the top car park)

The first week of July saw little action from the butterflies which have been low on the ground with only four species seen but that did include a couple of Red Admirals, firsts for the year. The latter half of July produced the first Gatekeepers of the year. The last week of July brought in a Painted Lady found on one of the buddlieas, along with a few Commas, Green veined White, Small and Large Whites

Other interest was a Spotted Longhorn Beetle 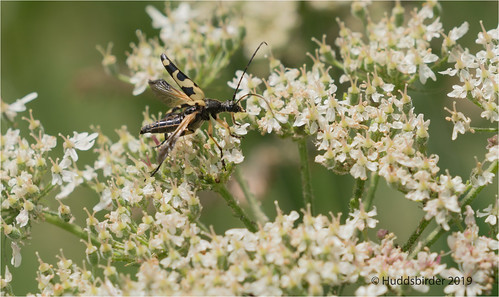 Rather a mixed start to August with the weather lots of rain, wind and occasional sunny spells but that doesn’t stop the nature.

Still rather good numbers of butterflies around with now plenty of Peacocks about along with Green veined Whites and Gatekeepers. Other butterflies in smaller numbers and some now showing signs of wear and age, Comma, large White, Meadow Brown, Ringlet, Small Skipper, Small Tortoiseshell, Small White, Speckled White.

Birds highlights at the moment includes Swallows, Buzzard, Kestrel ♀, and a family party of Grey Wagtails

Other wildlife included a beautiful hoverfly called Volucella inanis, one of the big hoverflies. Plenty of Hairy Shieldbug instars. Lots of Common Hawker Dragonflies along with Southern and Brown Hawkers can be seen at various points around the site

The end of the month highlight 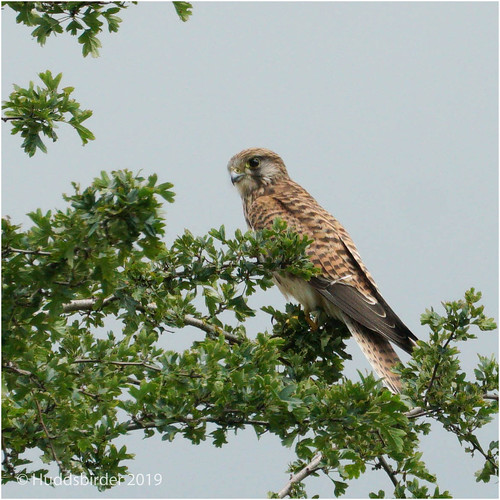 Birds are quiet and still a few butterflies on the wing

The Kestrel is still around and seems to be hunting the back field most of the time. Other bird highlights was a female Tawny Owl calling in the top car park early one morning at the month end 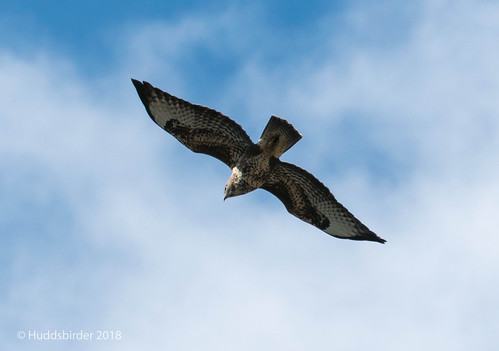 Its been a very wet start to the month which can only be expected with October but despite that there is a lot of interest about. The sunny interludes at the beginning of the month brought out a few butterfly species before they hibernate for the winter, bird species have also picked up with Common Buzzard seen on those sunny days ,a pair of Coal Tit around the feeders and with Siskin back in the woods a sign of winter coming

A very wet start to November in the first week so the only highlight came in the form of a Hawthorn Shieldbug, birds were quiet with only Jackdaws and Crows about really.

The rain continues into the middle of the month making thinks very wet under foot. The bird highlights included a single Common Buzzard, Grey Wagtail and a Kestrel 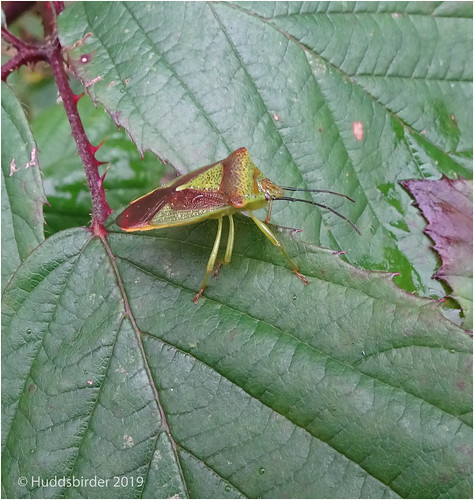 Well December has started off on a drier note and the birds are active again. Main highlights being the Female Kestrel still hunting over the nearby fields and Common Buzzards soaring over the same field, there was also a Grey Heron in same field at the beginning of the month.

A number of Blackbirds are again with us for the winter but no sign of their cousins as yet (Redwing, Fieldfare)

So another year comes to a close, 2019 did bring a couple of highlights these being the added bird species Garden Warbler taking the tally to 65 species and the Early Thorn Moth takes their tally to 45 species. Butterfly species was 19 out of 21 seen on site a great tally however the year goes for me to the Lesser Spotted Woodpecker that was seen early in the year a species on the decline nationally and one that’s been absent on site since 2008.

Thanks for joining me in 2019 please come back in 2020 to see more Nature on a Lunch Break, with that have a great Christmas and a Happy New Year