Week 29 now week 17 of the lockdown measures although restrictions are slowly lifting with pubs, cafes and Restaurants opening.

We ventured out to the coast to a favourite place if ours, Filey. Our first pretty off call was Filey Dams where we saw, Black headed Gulls, Canada Geese, Grey Heron, Little Grebe , and a handful of Dunlin.

We moved on to the country park and had a gentle stroll around, off the brigg we saw Gannet, Puffin, Razorbill, Fulmar, Kittwake, Guillemot and Shag.

We called in at Bempton Cliffs mainly for the spectacle of the seabird city and wasn’t disappointed we saw all the usual as we did in Filey, but these were much closer. Tree Sparrow and Linnet were added for the day.

Still in lockdown and week 28 of the year, I had some free time so ventured out to the local quarry where there is a system of ponds and hopefully bag a few Dragonflies.
Walking down a pick up a few butterflies namely Meadow Brown,  Peacock, Green veined White, Ringlet, Small Heath and a new one for the year Gatekeepers were now out.
Out at the ponds Emperor Dragonfly were still around along with Blue tailed Damselfly but new for the year were Brown Hawkers and Emerald Damselflies.
Moths seen were Narrow bordered five spot Burnet, Silver Y, Shaded broad Bar and a Straw Dot

Video of the Day  HERE

Still in week 26 of the year and week 14 of the lockdown and I was having another day out to get my Common Blue Butterflies this time to a new site over near North Cave.

Arriving on site at Kiplingcotes Chalk Pit car park (Location) at around 10am and parking to the sound of a Yellowhammer was a warm welcome, a quick snack and I was off.

A was soon picking up butterflies species on way to the pit, Red Admirals, and Meadow Browns, the walk is along an old railway line lined with flowers, a few hoverflies were seen here Pied Hoverfly being one.

On site I could see plenty of Marbled White Butterflies about and a few great photo opportunities. Common Blue was on site but not settling, need a lot of patience today I think to catch these. During the walk around the site I picked up on Small Tortoiseshell, Ringlet, Large White Butterflies and Moths were Cinnabar, Narrow bordered Five Spot Burnet and Silver Y’s

That was Kiplingcotes I was heading home but found myself passing North cave Wetlands so popped in (Car Park Location), well had to really. So off looking for Dragonflies and Damselflies it would be nice to final catch up with a Black tailed Skimmer here (it wasn’t to be). Damselflies were about Blue tailed and Common Blue Damselflies were the ones I found, the larger dragonflies were Broad Bodied Chaser, Four Spotted Chaser and Emperor Dragonfly. One of the highlights was a Twin lobed Deer fly of which I got lucky with, it landed on my hand but it wasn’t till after I took the photo that I saw it was a female (these can give a nasty bite).

More photos can be seen at my Flick Account HERE

Week 26 of the year, week 14 of the Lockdown with things still slowly being lifted but the big changes will come on the 4th of July when the Pubs, Restaurants etc will be opening and people once again coming closer together.

Out again the and out to lockdown site No2 for more Dragonflies. My first find on site were Common Green Grasshoppers, so a nice little macro shot of that. Nearer to the ponds I came across Ringlet, Meadow Brown, Small Heath and Large White Butterflies.

On the ponds were Broad Bodied Chaser, Emperor dragonfly and finally a Four Spotted Chaser put it was around the edges on the vegetation I was more interested in with all the Damselflies settling now and again, a great macro opportunity of Common Blue, Blue tailed, Azure and Large Red Damselflies

More Photos can be seen at my Flickr site HERE

Week 25 of the year and week 13 of the Lockdown, still furloughed, so with sun shining I decided on a all but brief visit out to one of my lockdown sites for a look around for Common Blue Butterflies.

There were a few of the common butterflies around (Large Skipper, Small Skipper, Small Tortoiseshell) and now Ringlet and Meadow Browns were being prominent but alas no Common Blue

I now find myself furloughed for a three week stint, thank you Covid-19. Restrictions continue to slowly ease but with no news of restrictions for the vulnerable, life carries on in a difficult format.

Sun was shining, vitamin D was calling and so was my well being, so a local walk where I knew I wouldn’t come across anyone.

My first stop was near a cluster of daisies were I saw my first Meadow Brown of the year along with Large Skipper, a seven spot ladybird larvae was a nice find also. Moving on I came across an area of bramble where I found more Meadow Brown and Large Skipper with as very brief view of a Common Blue.

Walking thru the wood I came across a Large Red Damselfly before I finally reached my target area where I was hoping for larger dragonflies.

On approaching the first pond I could see a couple of large dragonflies on settling in I found a singles of Emperor and a Male Broad Bodied Chaser.

Looking around the other ponds I came across more Emperors, Broad Bodied Chaser and also a single and all but brief view of a Four Spotted Chaser which was seen off by an Emperor

View a Video of my day at the Ponds HERE 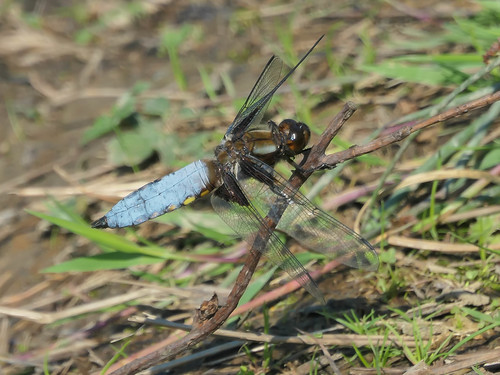 We carry on in lockdown with the news this week that the vulnerable people can now visit a family member elsewhere but at a social distance, I myself enter my 12th week of isolation.

I was back at the lockdown reserve where I knew I wouldn’t come across anybody hoping this time to come across the Common Blue Butterfly, my hopes were to be dashed when the rain soon set in. I did however manage a couple of flower macros along with bees and hoverflies before I left the site in a brighter moment of sunshine.

I headed back home but decided on stopping off at a local viewpoint, the weather had now brighted up closer to home but the wind was still a concern. On entering the site I was a bit dismayed, the long grass had been cut this was a first for me on this site. I was here now so I had a look round and picked up a couple of Small Heath Butterflies, which after disturbing them soon went to ground in the grass keeping out of the wind. I found a part of the site which had been left uncut, mainly due to its passion I think, it was also catching the sun along here too. I spent a while down this ride picking up a couple of Common Carpet Moths… hoverflies inc. Helophilus trivittatus, Episyrphus balteatus (Marmalde Hoverfly) and Rhingia campestris

Lockdown continues but the relaxing of certain restrictions seeks to have gone to some peoples heads, second peak! I think so.

Back to the isolation site and back to nature always great for well being, butterflies again proving difficult with less than a handful of species to boot, Dingy Skipper, Small Heath, Small White and a single Large Skipper a first for the year.

Other highlights were Mother Shipton Moth and Hairy Shieldbugs.

The lockdown continues the sun still shines, so it was out again to my isolation reserve.

The butterflies weren’t playing today hard to find and not settling, the ones I found were Dingy Skipper (now showing signs of wear), Orange Tip, a single Peacock, Small Heath today were in abundance.

The sun still shines lockdown carries on and I’m grateful for a little site that I can go to where nobody seems to go to keep my well being good, with insects and photography.
There was good numbers of butterflies about especially Small Heath and Brimstone neither settling,  Dingy Skipper once again proving difficult to find, finally managing to get a few shots with one that was a bit more settled, also managed to finally pin down Orange tip, Green veined White, Small White with an added bonus of a Mother Shipton Moth all on the same flowers,  two Peacocks were seen along the track also.

Hairy Shieldbugs were still around mainly on the old dandelion heads,  and birds around today were Whitethroat,  Willow Warblers,  Yellowhammer, Goldfinch and Song Thrush