With over 500 days (20th September 2008 and Wilsons Phalarope) since the last lifer something had to be done weekends were busy the weather wasn’t settling so I took the day of work and headed to Newholm, Nr Whitby, to look for the Thrush. Arrived at 7:15am and parked up to be met nicely by a hunting Barn Owl in the adjoining field, great start, got set up and off to No5 to look in their back garden, never comfortable with this, anyway had to wait 20mins but in the mean time birds were coming into the feeders Willow Tit, Blue Tit, Great Tit, Coal Tit, Bullfinch, Tree Sparrow, House Sparrow, Blackbird and then the BLACK THROATED THRUSH (Female ♀) . I did manage to get a couple of photos, not good I admit, by the time I had enjoyed the bird it was only offering its back and then went not to be seen again by me in the next 40mins by which time a cat had happily walked in  the garden so it was time for me to be off

I know not much of a photo better ones done by a pro on his blog here, I headed to Scarborough next to see a gull I hadn’t seen for a number of years, actually since 2003, as soon as I drove into the car park there was three Mediterranean Gulls (see below photos) on the grass verge along with Black Headed Gulls 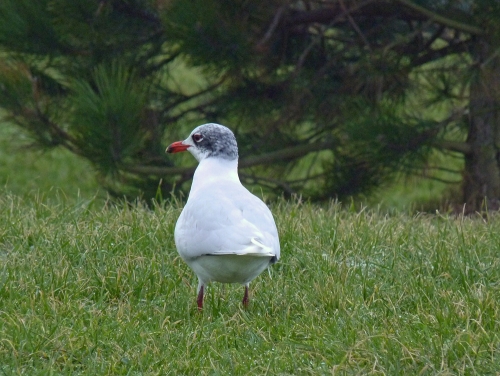 A few photos and I was off again this time to Filey and along the Brigg hopefully to find sea duck and waders. The weather had changed a lot from this mornings fog journey into Newholm now I was in sunshine going along the Brigg watching Turnstone, Redshank, Bar Tailed Godwit, Oystercatcher, Purple Sandpiper and Knot. Whilst on the Brigg flying past were Fulmars, Gannets, and Guillemots on the sea Common Scoter, Long Tailed Duck, Eider, Shag, Cormorants and Red Throated Divers.