Posted on April 23, 2011 | Leave a comment
Saturday 23rd April saw us on a visit to Leighton Moss RSPB site [Location], the
last visit I made was back in January 2000 so this was well over due. We started the bird hunt at Lillians Hide for our first bird the Mediterranean Gull that had taken up residence in the Black Headed Gull colony it took a little bit of finding
amongst all the Black Heads but find we did, other birds from here were Marsh Harrier, Shoveler, Tufted Duck, Mallard, Shelduck and Teal. On then to Greisdale Hide on the way Chiffchaff, Robin, Sedge and Reed Warblers, we added Lapwing and Oystercatcher from Greisdale but not the garganeys. It was soon dinner time but first a stop at the feeders to see Marsh Tit, Nuthatch,Bullfinch, and Blue Tit.

After dinner a walk down along the causeway with more Marsh Harriers, Black Headed Gulls, Lapwing, Reed and Sedge Warblers but Blackcap was a new one for the day and Buzzard over head. The final walk was on to the Eric Morecambe and Allen Hides this was a good walk seeing Common Whitethroat, Lesser Whitethroat, Willow Warblers and Sedge Warblers finally adding some waders to the list from the hides Avocet, Black Tailed Godwits, Common Redshank, Spotted Redshank, and Knot

A couple of record photos from the day :- 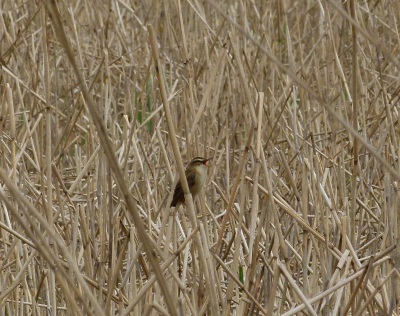