Our third birding trip out was out at Kartong Bird Observatory and was arranged prior to us hitting the Gambia thru Farakunku Lodge, but can be arranged once there if necessary, price for the day was £125 which included lunch and a River trip on the river Hallahin, and our bird guide for the day was Colin Cross. Abbreviations L = Lifer and NFG new for Gambia

We met up with Colin at the Observatory and after a brief introduction, Colin asked me what I was hoping to see for the day at Kartong, I didn’t know what to expect due to having nothing in mind really just a day’s birding, but he wet my appetite with White Fronted Plover (which I thought were up at Tanji but Colin said they had a few there, nice surprise) , Audouins Gull which winter, and African Fish Eagle hopefully on the river trip.

Great into the birding then which can easily be done from the observatory wall, forgot to mention that it was raining slightly at this point but Colin was assured that this would blow over and within an hour he was right, meanwhile back to why we were here birding, from the obs we saw Purple Swaphen (L), Squacco Heron, Cattle Egret, African Jacana , Spur winged Plovers, Black winged Stilts and then a couple of  Common Snipe flew past and settled in the small pool in front of the obs. The rain was subsiding slightly so we ventured out along the red road with large pools mainly on our right side has we made our way to the beach, plenty of White faced whistling duck could be seen, Colin mentioned that a Northern Pintail (NFG) may be around this wintered last year and may put in appearance again, we did eventually pick this bird up in another pool further down the road, whilst looking for the Pgymy Goose (which wasn’t found), then Colin picked up a Allen’s Gallinule (L) low in the reeds which we both managed to pick up, another winter bird which Colin was very happy to see. We moved further on picking up things like Malachite Kingfisher, Grey Headed Kingfisher, Rufous Crowned Roller, African Spoonbill, Black tailed Godwits (these were a familiar sight) , we did eventually make it to the beach, we moved thru the mangroves to get to the beach scaring up Yellow Wagtails and Crested Larks as we did so, on the beach plenty of Whimbrel were easily seen along with Oystercatchers, terns a plenty and on scanning thru we could see lots of Common Terns, which Colin was surprised about but happy about , we could also see the big Caspians Terns towering over the Commons. We started scanning for smaller waders and Colin soon picked up a couple of White Fronted Plovers (L) nearby in their favourite area, it was whilst I was looking these over that Colin picked up an immature Audouins Gull (L) in the Gull/Tern pack, it was here that I found out that Colin is a patient man and didn’t give up on me as we both went over the finer details of a Audouins Gull, we hoped also that it would fly a bit which it eventually did so we could see the longer thinner wings and black bar on the tail contrasting with the white in the tail, whilst I was going over the gull Colin suddenly started shouting “Hudsonian Whimbrel” (L) turning around I got sight of the bird has it passed me, differing in flight than the Eurasian, the Hudsonian was even more distinctive. The rump was completely brown, as was the tail, with no white V marking up the back or on the tail. The other difference I saw was the bird gave off a more obviously cinnamon-brown colouring on the underwing and appeared completely uniform in flight as against the Eurasian paler underwing, the bird was lost to sight as in ventured into the mangroves, I turned to try and find Colin but I couldn’t see him for his smile. A returning bird to the Gambia from last year which Colin was hoping for on that high we headed back to the obs, we walked Colin was dancing, going back thru the mangroves we stumbled upon a pair of  White Fronted Plovers , got some record photos of the pair when they slowed down a bit, I thought Sanderling were quick on their feet but these guys can certainly move.

We settled into the obs with a cold drink looking out over the reserve when my wife picked up a hovering bird, first thoughts were Black Shouldered Kite or a Snake Eagle this one turned out to be a Beaudouins Snake Eagle (L), what a cracking bird to watch, chocolate head, and angel wings as it started to drop, very similar in appearance to Short Toed Eagle, not an easy bird to catch up with due to the spares population , so another good one to catch up with. Well six lifers so far this morning could it get any better, off to dinner.

Dinner was on the banks of the river Hallahin which separates Gambia and Senegal, we eventually eat up and we were off again. On to the boat, life jackets supplied, and heading towards the river mouth looking for Terns’ which Colin hoped would be resting on one of the small sandbanks. On arriving there were no terns to be seen but Whimbrels, Oystercatchers’, Ringed Plovers, Bar tailed Godwit and Grey Plovers were easier to find.

Okay we decided on turning around and heading up river towards another sand bank in the hope of terns up there passing Redshank, Greenshank, Curlew Sandpiper as we did so, Colin then caught the sound of a bird call we he described as “catish” coming from the mangroves, these were very difficult to find and see but with perseverance we finally caught up with Splendid Glossy Starling (L), bingo another great bird to catch up with, just one more to go, the big one.

We turned around and headed back towards the landing area to moor up has the day was coming to a close, I was scanning every tree top in the vain hope that one may have landed there, and then I caught sight of a large bird sat in the tree top but at a distance white top dark body, I pointed Colin towards the bird “Em looks good, but it might be a Palm Nut” he said we edged closer and closer and then we were at a distance were I could see the white of the head flowed down the back in to a V shaped, Yes that confirms it, it looked beautiful even at this distance now I was hoping at this point we could get closer before it flew and we did right under the tree it was perched in a splendid African Fish Eagle what a sight, majestic. It let us sit and admire it taking pictures in doing so and then enough was enough stretching its wings it took to flight disappearing into Senegal and lost to sight…now that’s how you end a fantastic day’s birding and how to make a Yorkshire Man smile 🙂 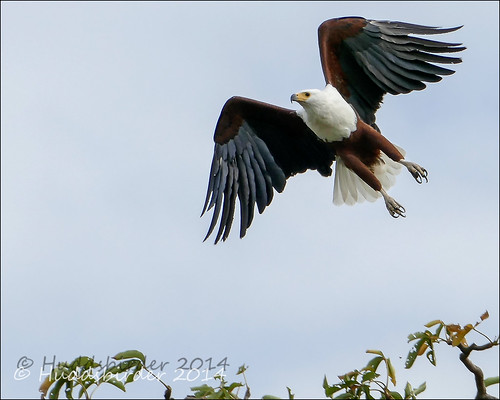 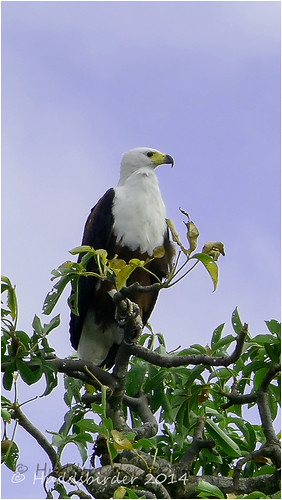 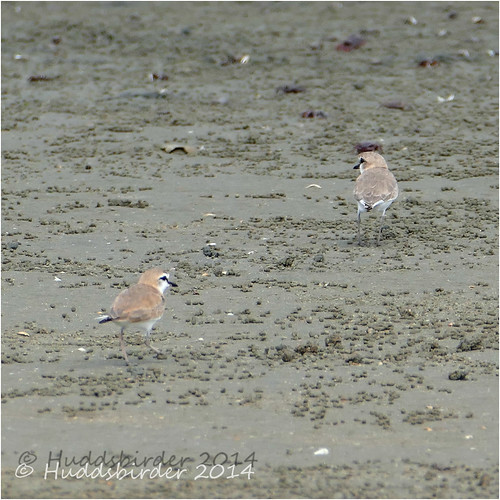 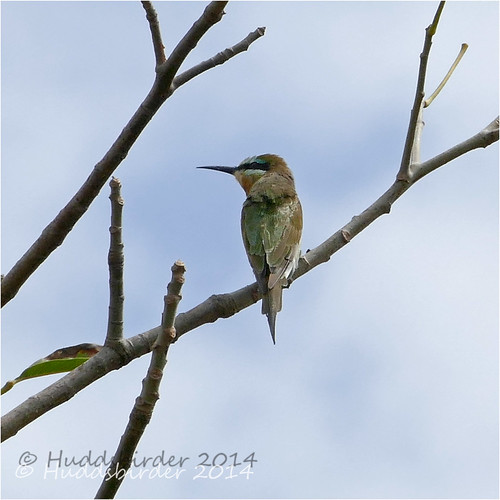 The view from Kartong Bird Observatory 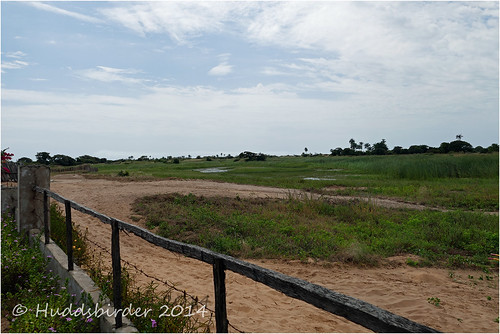