Autumn migration was now in full swing and we had to decided where to place ourselves for the spectacle East Coast of Flamborough or Norflok and Holkham/Wells which seemed to be turning the birds up,

We set off at 6am and picked up another party at Doncaster then motored on to Norfolk and Wells next the sea arriving at at about 9:30am ‘ish , we agreed that the Red-flanked Bluetail would be the first port of call, so off we set towards the drinking pool its last reported location. After a brief walk and asking a few people where the drinking pool was we settled in to the site with about c50 other folk, we watched Robins, Goldcrest, Jays and Redwings going over before the whisper started but it was only a brief glimpse, I didn’t managed to get on the the bird the first time it showed as it was seen off very quickly by one of the Robins. Half an hour and I finally got a flight view as it settled to the other side of the pool, so off I went to the other side and it was here that I finally got to see the my first Red-flanked Bluetail and what a beautiful bird it is. it was quite active feeding amongst the bushes, with at times being seen off by a couple of Robins now and again, however great views were obtained of the bird especially the bluetail (It was originally thought to be a member of the Thrush family but is now considered to be an Old world Flycatcher. Similar in size to the Common Redstart and slightly smaller than the European Robin, it frequently flicks its tail in the same manner as the Common Redstart, and regularly fly’s from a perch to catch insects in the air or on the ground, and should be winters mainly in South-eastern Asia)

It was then on to our next location to try and pin down our next victim of the day, a lifer for two of the days crew, a Blyth’s Reed Warbler (this one should be wintering in India or Sri Lanka. Very similar in appearance to the Reed Warbler but this bird is greyer on the back, the forehead being less flattened and the bill is less strong and pointed. These birds favour bushes and tress unlike the Reed Warbler which favours mostly Reed Beds), anyway back to the bird. It took a few hours and a few visits during the day to finally pin this bird down, a very difficult bird to locate as previously stated these birds favour bushes and this one certainly did giving a lot of people the run  around, however we all finally succeeded in seeing the bird.

Another highlight of the day was a Isabelline Shrike also around the Holkham Pines Area, probably of the race Daurian, I last saw one of these birds back in 1988 at Spurn Head, since then these bird have been split into the Daurian, Turkestan and Chinese Shrikes (see this Link). This bird gave excellent views out in the open as soon as we turned up on site.

Other birds of the day were Firecrest (we connected with two),  Humes Leaf Warbler, Yellow Browed Warbler and Pallas Warbers also at Holkham 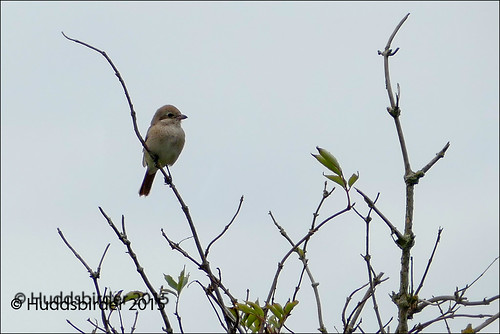