Sands Lane and a New Reserve

I was due to meet up with somebody this morning to have a tour of one of “The Patch” reserves that I hadn’t been able to get on due to it being a restricted access site but that wasn’t till 9:30am so I had time to drop in on Sands Lane on my way.

Sands Lane still has the  Great Northern Diver present and once again in the middle of the large lake, which I didn’t mind this time because I left the DSLR at home. Along with the Diver…Great Crested Grebe (2), Tufted Duck (10..7♂ 3♀), Coot, Mute Swan, Mallard, Black headed Gulls. I moved on then to the weir to find more Black headed Gulls, Common Gull (1), Mallard, Canada Geese, Goosander (1♂ 1♀) 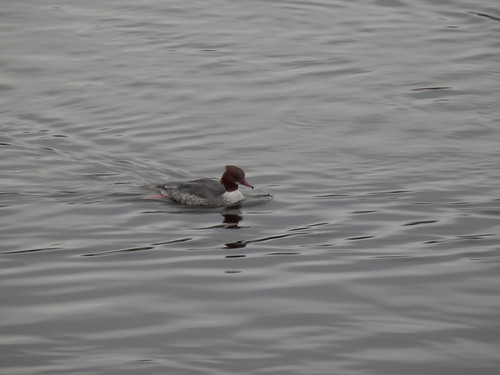 It was then time to move on to the new reserve at Healey Mills, I meet up with my guide for the morning and having passed security we were soon on the reserve negotiating our way around the now fallen trees from this weeks storms. Moving thru the vegetation we were soon upon the area were the feeders are looking at Blue Tit, Great Tit, Reed Buntings, Dunnock, Blackbirds, Stock Dove, Chaffinch and Robins. Hitting the second area we had to put on our hard hats and hi-vis vests or risk being thrown off site, more Reed Buntings could be seen on the filter beds along with Pied and Grey Wagtail. Around by the still ponds Shoveler, Teal and Common Snipe on the nearby river Goldeneye, Goosander, Cormorant and Mallard. A quick mornings tour to a site I hope to be seeing a bit more of, unfortunately only half this site falls within the HBW area.