Well the start of a new year and some big adventures to come this year but todays visit was to the Yorkshire East Coast were the highlights for today could be found at Flamborough and Filey, with hopefully bagging a couple of lifers to get the year off to a good start.

Our first port of call was out to Filey where a long staying Surf Scoter was to be found, we walked on to Carr Naze where we could look over the sea and the bay. The birds observed were Black headed Gulls, Rock Pipits, Cormorant, Shag, Red throated Divers (flying North mainly and a couple in the bay), a bird far out, we decided was an Eider. So no luck  Scoter wise so we decided a walk down on to the brigg, idea being to get lower down to see if that would be an advantage. Settling in on the brigg and scanning around we picked up a few waders, Turnstone, Ringed Plover, Redshank, Knot, Oystercatcher, and Purple Sandpiper also Grey Heron, Great Black backed Gull,  Herring Gull, Cormorant,Shag, Razorbills, Red throated Divers once again no Surf Scoter so back up to the top picking up a Male and Female Stonechat on route.

Back up at the top we saw a few more birders had gathered on the brigg so we headed back towards them. We picked up the “Eider” bird again this time further in towards the brigg and eventually started to fly and landed even closer to the brigg, this time giving more ID features to confirm without doubt this was the bird a young drake (lifer in the bag) see Surf Scoter

On then to Flamborough and hopefully and the Richard’s Pipits’…after a very muddy walk  picking up 2 Whooper Swans and Fulmars on the way down walk we gathered with a few other birders and after 5 mins some guy picked a bird up with the another bird picked up quickly by another guy, we were all soon on both birds as they came together in the grassy field giving us all good views 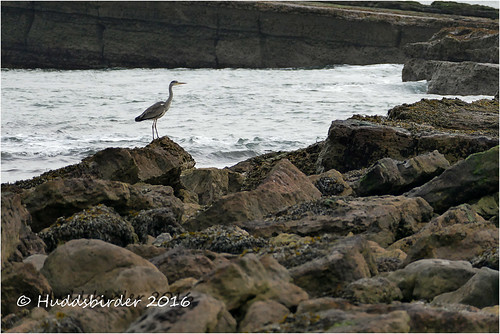