Old Moor and beyond

After early morning jobs I decided since the weather was great I would try my changes at Old Moor again for a few more migrants and insects.

Well I arrived at 11am and set off towards the Family Hide to nail the Mediterranean Gulls this time, it took a while looking thru all the Black headed Gulls, and a few Lesser Black backed Gulls but I found them this time amongst the Black headed Gulls on the first island, two birds seen at long last. Other birds seen from here were the Sand Martins now making home in the man-made bunker, Tufted Ducks, Mallards, Cormorants, Moorhen, Coots, Canada and Greylag Geese.

Down on to Green lane where there was a Reed Warbler singing away close to the path, I decided on trying to see it and with patience it finally paid off with some great views of a secretive bird, then I caught sight of a Green Woodpecker as it flew down the lane, Brimstones and Orange tips were flying by as I made my way finally to the Wader Scrape hide were I saw a single Avocet, Oystercatcher, Shelduck, and plenty more Black headed Gulls

Decided then on a walk down to Bolton Ings down along Warbler Way were there were plenty of Willow Warblers and a few Chiffchaff, but around the hide was a Common Whitethroat giving good views, Dunnock again, Pheasant a few Goldfinch. On the way back a few Speckled Woods were seen.

A quick walk around the Dragonfly ponds in the vain hope of some damselflies, but alas none were found.

I travelled back then and took in the Ingbirchworth area were I finally connected with a single Wheatear, relief didn’t think i was going to connect with one this year, lots of Woodpigeon and Stock Doves about.

On to the Langsett area in hope of Pied Flycatchers, but on arrival to the site I found extensive workings going on so I wasn’t hoping on picking any up and I didn’t but a solitary Common Sandpiper on the dam wall was a nice bonus.

The final place for the day was Broadstones Res. for the reported Grasshopper Warblers seen that morning, they were not found but a lovely male Whinchat was the bird find of the day. Along with the Whinchat was Common Whitethroat,Yellowhammer, Reed Bunting, Meadow Pipit, Willow Warblers 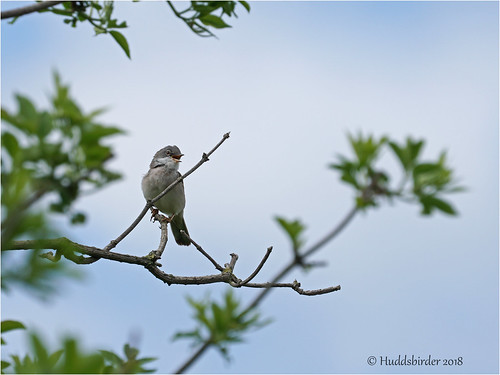