After a few weeks at home it was time to get out and about again and as always Old Moor is a first choice. Arrived at 9:15 to Dunnock, Blue Tit, Black headed Gull, Woodpigeon, Goldfinch from the car park

After checking into the centre I headed round to the Tree Sparrow Farm to see what was around the feeders, a good selection Reed Bunting, Dunnock, Great Tit, Blue Tit, Chaffinch, Bullfinch, Brambling ♀, Robin, and Tree Sparrow. On then to the Reedbed screen in the hope of seeing a few special birds, so I waited watching Little Grebe, Great Crested Grebe, Mute Swan and Coots, 20 mins in and a bird flew across the channel it eventually settled but out of sight then re-appeared, Cettis Warbler nice, it then disappeared out of sight again, it was whilst waiting for the Warbler to appear again that I saw something moving across the top of the Channel near the Mute Swan area, Bittern, lovely never seen one swim before, a great one to see.

A great start to the day on to the Family hide to see Redshank and Green Sandpiper, also from here Teal, Mallard, Tufted Duck, Wigeon, Common Gull, Lesser Black backed Gull, no Mediterranean Gull as yet

On the way back at the field pool hide I caught up with a Black tailed Godwit, and then finally around the pools 2 Small Tortoiseshell Butterflies….. in February, certainly a contrast from last year 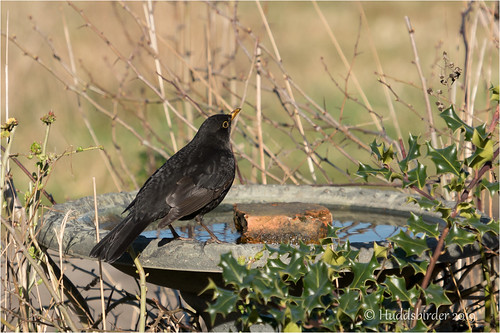